Published 1 February 2017
A review of the gaming capabilities of the 12-inch MacBook (2016). Includes a short-list of games and their performance.

After travelling quite a lot during 2016, I decided to pick up a 12-inch MacBook so that I could travel light and run Xcode/Jekyll on the go. I didn’t expect much from a 1.2Ghz m5 processor but, in preparation for a recent trip, I downloaded some games to try out regardless. Overall, I was pleasantly surprised, even if I won’t be playing my favourite AAA games away from home. 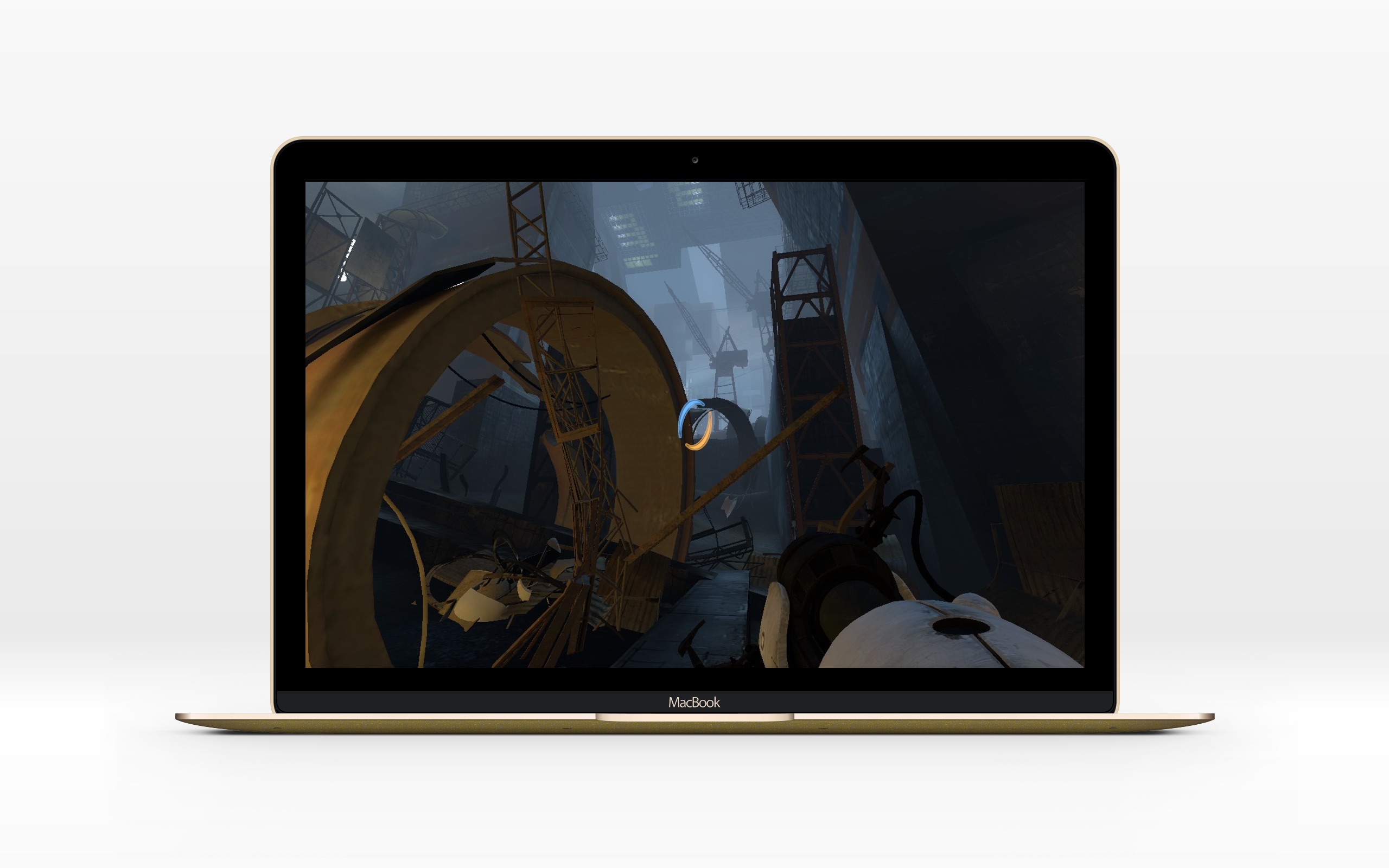 I did most of my gaming on the titles below with the charger attached, just incase that made a difference to performance. I also closed down all background apps (Safari, Mail, etc) as I knew that CPU cycles would be precious. I played each game for at least 20 minutes to allow the device to heat up in case of throttling and I tried to find busy areas / load late game saves to test realistic situations. However, some games I didn’t have late game saves for and they could potentially perform worse during a busy end game. All games were played at 1280x800 and on macOS 10.12.2 unless otherwise stated.

One thing I noticed was that Unity titles overall struggled, even for simpler games. I guess that Unity adds some overhead in general and smaller game teams probably don’t get as much time to optimise their code. Some Unity games also had issues starting up - crashing a number of times before finally working. A final comment before digging into the games, was that one or two games (Shank) also had issues creating a full-screen OpenGL context - they would sometimes end up slightly off the screen. Playing windowed or sometimes just tweaking the GFX settings fixed this though.

Portal: Ahh, some good old fashioned puzzle FPS action. Here you get the choice between a pretty solid 60fps with fairly low settings or you can have the higher settings but the framerate will sometimes dip. It's an old game, but a classic - and it's nice to be able to play it through again when on the go.

Portal 2: It made me happy to see that the sequel to Portal was equally as playable. You don't always get a smooth 60fps like the original Portal, but for the upgraded visuals you can get a decent 30+. If you enable laptop mode, it limits you to 30fps to save some battery life, which is pretty cool.

Sky Force Anniversary: A fun and not too crazy vertical scrolling shooter with a cool visual style. This is baesd on an iOS game, so you would expect good performance and I'm happy to say that it delivers. I experienced satisfyingly smooth gameplay while playing Sky Force Anniversary and it looked pretty crisp on the nice, small screen.

Shank: Shank is a side-scrolling arcade beat-em-up which I actually played with a PS4 controller connected over Bluetooth. The controller worked great in this game (even though some other games had some issues) and while the FPS flip-flops a bit between 30, 45 and 60 I felt that the game was perfectly playable.

FTL: Faster than Light: A technically simple game with 2D graphics and not too much going on at once. FTL is a wonderful time-sink to travel with and it runs very smoothly on the 12-inch MacBook. Another game you can get on iOS, but I prefer to play it with a mouse and keyboard and with the addition of mod support, you'll get even more hours out of it.

Civilization IV: While Civilization VI was recently released, Civilization IV is still a strong strategy game worthy of taking with you on vacation. I only played through the first couple of hours, but consistently got 30+ fps. As it's turn based, I imagine it should be playable down to ~20fps too - so there is some headroom for additional late game complexity.

Invisible Inc.: A great little turn-based tactical stealth game with a lot of charm. With all of the settings off, performance was pretty good. It sometimes fluttered down to 45fps from 60, but this was clearly enough to play a turn based game. I only played a few of the early levels, but the performance leaves lots of headroom for what might be a more hectic end game.

StarCraft II (Single Player): Classic RTS fun. When you enable the experimental Metal driver support, you seem to lose v-sync but the FPS is seriously impressive (if correct). Even during the end of a pretty hectic mission I saw 50+fps. I wouldn't want to play this online competetively, but if you enjoy the campaign - just plugging in a mouse and playing through again would provide hours of fun.

Hearthstone: This free-to-play collectible card game has got most of my friends hooked and I enjoy it on and off. Hearthstone runs on iOS and Android, so you would expect it to run on the 12-inch MacBook, but I figured someone would appreciate confirmation that it runs fine on my machine at medium settings and 1280x800.

Chaos Reborn: Chaos Reborn is a remake of a classic strategy game from the original maker of XCOM. I played the first few battles and they ran adequately at 20-25fps. It was definitely playable, especially as it's turned based, but it wasn't overly smooth.

Torchlight II: Click, Click, Loot, Click, Click, ARPG fun. Mostly 25-35 fps with all of the setting down. This was a bit troublesome during some of the big fights, but playable. I loaded up an end game save and did a bonus dungeon and it played okay, but you might find yourself dying to a boss if the FPS takes a sudden dip.

Darkest Dungeon: This side-scrolling dungeon crawler makes for an interesting challenge with some novel rules. Disappointingly, Darkest Dungeon only really ran at around 15-25fps, but for a turn based game that wasn't too bad.

Rocket League: Okay, I wasn't really expecting this game to be playable - but as it's my current addiction, I was kinda hoping it had some friendly low graphics settings. Unfortunately, at the lowest setting, this game looks like ass and kicking the settings up high enough to get rid of the awful scaling meant that the FPS was jumping around like crazy.

MASSIVE CHALICE: A turn-based strategy game that's a little bit like XCOM that would be perfect to play on the go. Unfortunately, MASSIVE CHALICE consistently ran at 10-15fps, even at the lowest settings (which looked quite poor and pixelated), so I don't think I would find myself playing this again on this device.

Offworld Trading Company: Offworld Trading Company is an RTS with a focus on economy instead of war (it's a lot more fun that it sounds!). Unfortunately, the game crashed a bunch of times for me before it would even work, and then the FPS wasn't great. As OTC is a pretty hectic game, I wouldn't fancy playing it with the low framerate.

Binding of Isaac: You might think this game should run on anything, but I think it's written in Actionscript/Flash and so the performance is pretty choppy. Unfortunately, this makes it tough to play, as twitch reflexes are key in this game. I suspect that Binding of Isaac Rebirth will perform better though, as it was built from the ground up in a more performant language.

War for the Overworld: I would have loved to have played this to get my modern day Dungeon Keeper clone fix, but unfortunately - I couldn't even get the game to start. The once or twice it didn't crash, I was hit with a black screen for an awful long time.
Post Categories
Projects by Type
Twitch Stream
I stream Game Development some Saturday evenings and random games on Wednesday nights. Check out my Twitch Stream (Orendil).
Advertisement
Twitter Feed
Tweets by JohnWordsworth